A Direct Mount Derailleur, “DRD”, was Shimano’s attempt to create a stronger frame to derailleur interface helping to provide more precise shifting. The hanger takes the place of the upper link of a conventional rear derailleur, connecting the frame to the upper pivot of a DRD specific mech and eliminating the weakest part of the system.

When Shimano developed its low-profile Shadow derailleur, its engineers needed to move the main derailleur pivot about 25 millimeters to the rear of its conventional location. In order to fit a standard derailleur hanger, this required the B2 link – a short span of aluminum that bolted to the bike’s derailleur hanger and provided the new upper pivot location. In short, the B2 link was a temporary patch that Shimano hoped to replace in the future with a more sturdy interface between the frame and the rear derailleur. This was the seed for its direct-mount system which was as an option for its SLX, XT XTR, ZEE and Saint Shadow-type derailleurs some years ago.

Direct mount did not need a push from Shimano to initiate. Much of the impetus for a stronger derailleur interface came from frame designers who had begun to move away from the open rear dropout and towards through axles, The Direct Mount concept simply encourages frame makers & Derailleur Hanger Factories, to design a link that connects the frame with the upper derailleur pivot. Shimano are unlikely to make their own links, that is a development left to the individual frame makers & Derailleur Hanger engineers.

Before & After Pictures of E-Thru Type Rear Derailleur, Converted from Standard Mount to Direct Mount with the use of a revised “rear direct mount hanger” 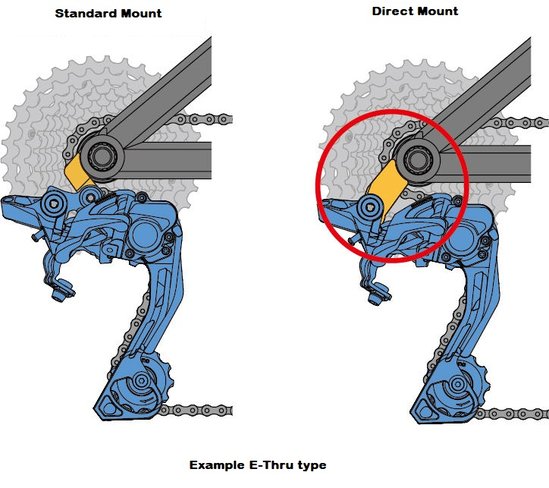